Taking a Look at Birkenstocks

There is little doubt when one makes the decision to purchase Birkenstock clogs which are famous all over the world that their feet will be appreciative of the gesture. This totally family operated and owned German company has a vast amount of successful experience in the manufacture of shoes and clogs. The hidden secrets of their ongoing success has been passed from one generation to the next for over 230 years now.

The wonderful Birkenstock tradition was begun all the way back in 1774 when the very first shoe was crafted by Johann Birkenstock. 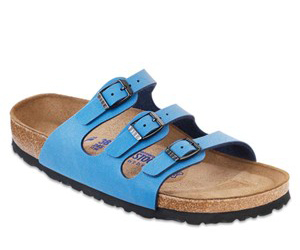 Years later, one of the grandsons, Konrad Birkenstock, took that original shoe and did some modifications on it. He then designed the very first contoured inner sole shoe for which the company is now famous for around the entire world. What this feature does so well is to allow the unique shoe to mold closely and well with the foot. This being accomplished provides the premier level of comfort that can be possible, as well as exceptional support at all times.

It is strange to think of sometimes how these items are used by people around the world. In many areas they are used by people as their choice of work shoes, while at home in Germany, many choose to wear them as slippers. The Birkenstocks have long been touted as a popular choice by those who work on their feet for extended periods of time such as chefs, nurses and doctors. These folks attest to the fact that aching and tired legs truly get the relief they are seeking when wearing them. In recent years especially, the endorsement of highly known people such as Heide Klum has brought the tradition of Birkenstock to the circle of high fashion where it has been totally accepted. Ms. Klum is now actually working with Birkenstock as a designer of footwear.

There has been one guiding philosophy for the making of shoes that the Birkenstock family has always and continues to adhere to at all times. That philosophy is to always use the resources provided by nature for the promotion and the preservation of the foot’s natural role. Besides staying with a naturalist philosophy, the Birkenstock family is totally committed to the protection of the environment. This company which was among the first to implement the use of adhesion techniques which are water soluble and solvent-free, also proudly notes that over 95% of adhesives that are implemented in the production process are eco-friendly.

The company has also made the decision to invest a great deal of their resources and time into making efforts to have their machinery consume less power and produce less heat as they continue their maximum efforts to go “green”. They have also instituted a special repair service for the shoes of their customers. This decision was made in an all out effort on their part to reduce the waste that is produced every year by society.

The company is always looking to offer the latest trendy fashions, but not at the expense ever of maintaining the comfort ability level. One particular favorite of the men is the Birkenstock clog known as the Boston available in either suede or leather uppers.

Due to customer demand, some clogs manufactured with plastic uppers are available. Both the Garden clog and the Chef clog are easy to maintain and clean, and are both water and oil resistant.

Birkenstock is anxious always for any input their customers offer, but they have always made the commitment never to compromise on the integrity and the quality of their footwear under any circumstances.

The Healthy Advantages of Birkenstock >>
<< How Birkenstocks Alleviate Pain